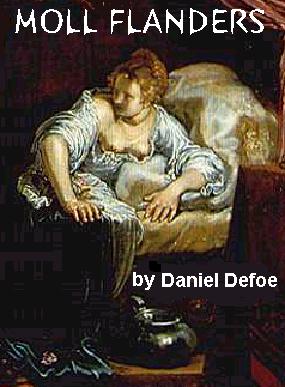 Moll Flanders is Daniel Defoe's classic tale of a cunning wench in the 17th century who, by her own admission, was guilty of multiple marriages (including marrying her own brother), grand theft, prostitution, and every conceivable crime other than murder and treason.  Her one saving grace is her good manners and breeding which serve to disguise her criminal acts.  There is no depravity to which she will not stoop, including abandoning her own children.  Moll Flanders is merely one of several aliases by which this predator attempts to cover her tracks and outwit the law.  A true gold digger, Moll snares unsuspecting gentlemen with cultured conversation, fashionable attire, and a perfectly sculpted body.  The story is timeless—a warning to good people everywhere that the worst evils come in shapely packages.

Told in the first person, Moll Flander's infamous journal cannot help but engross the reader.  Daniel Defoe brings us to sympathize with her condition by making us see that the biggest possible crime in the England of his day was to be found guilty of poverty.  Indeed, Moll gravitated to crime because she could not afford the lifestyle to which she had become accustomed through honest labor.  But the wages of sin prove to be fleeting and she at long last repents her wicked ways.