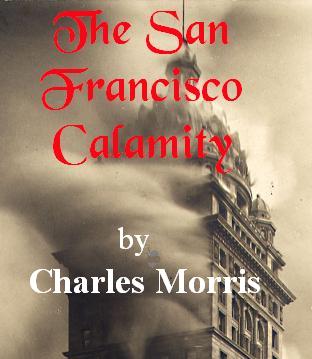 THE SAN FRANCISCO CALAMITY BY EARTHQUAKE AND FIRE

A Complete and Accurate Account of the Fearful Disaster which Visited the Great City and the Pacific Coast, the Reign of Panic and Lawlessness, the Plight of 300,000 Homeless People and the World-wide Rush to the Rescue.
TOLD BY EYE WITNESSES
INCLUDING GRAPHIC AND RELIABLE ACCOUNTS OF ALL GREAT EARTHQUAKES AND VOLCANIC ERUPTIONS IN THE WORLD'S HISTORY, AND SCIENTIFIC EXPLANATIONS OF THEIR CAUSES.
EDITED BY
CHARLES MORRIS, LL. D.
PUBLISHER'S INTRODUCTION TO 2005 EDITION
The 1906 San Francisco earthquake and subsequent fire was, up to its time, the greatest disaster to ever befall a city in the United States. What is truly amazing is the speed in which municipal officials, the United States Army and the federal government acted to restore order. Within days there was sufficient food and shelter on hand to provide for the 300,000 people that had lost their homes.